To gather the timber there were a number of mills, the first, the Lyons Mill in what is now Mount Helena (at this time Gidgie was included in that area). Initially, the timber was carted by a rail link from Gidgegannup to Mt. Helena.

Naturally, to fell the trees a large labour force was required as the cutting was by crosscut saws, with a man on either end pulling, later by the Widow Maker, a self propelled circular saw, which, as the name implies, was a dangerous occupation. Many of these trees were quite large, some of the butts over two metres in diameter. 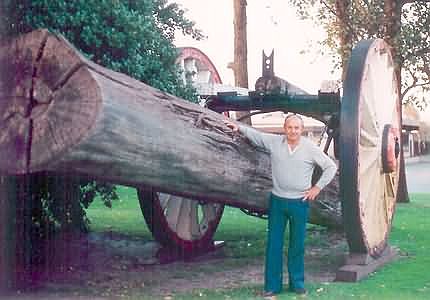 There were various mills opened later, some driven by steam, others by diesel, with the connecting rail lines in almost every direction to the mills. One section of an old line bed may be seen on the south side of Toodyay Road, just behind the local fire station.

During this period, the timber workers began to set up camps for their families, a lot were rather primitive but enabled them to have their families with them. Children, of course, were also here. As there was no school in Gidgegannup, they were transported to Mt. Helena where a school had been established. Some of the time, on the timber trains and later, as the timber became too scarce for the rail run to the mill in Mt. Helena, on the horse drawn dray and later an old petrol driven truck, following the route of the old rail line. Along which a road was later constructed to become Bunning Road.